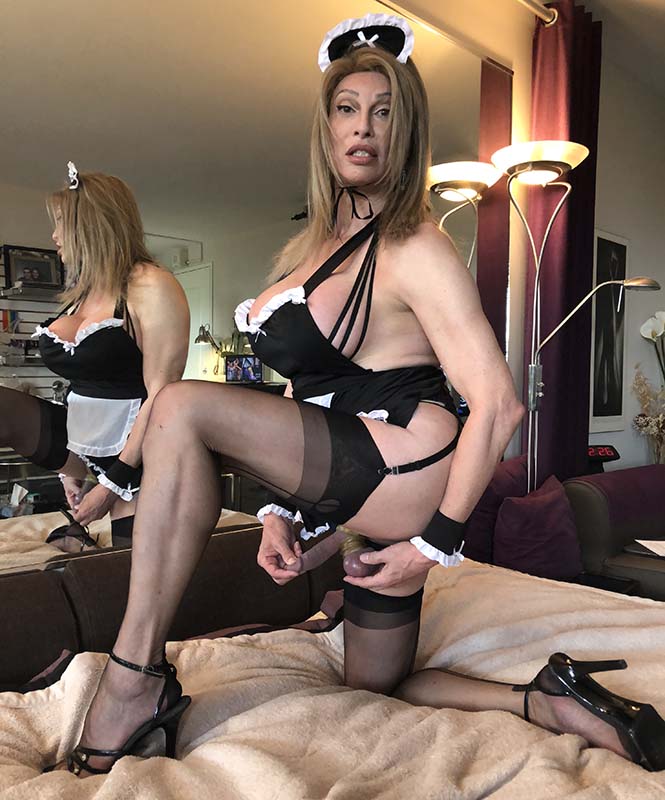 As he drove home from work exhausted after a long week he found himself looking forward to the weekend. His life was away for the 3 days and he was looking forward to the quiet time at home. He also was relieved that the new maid Dee was off for the weekend as well. She had been hired by his wife and had been helping with meals, work around the house, bills and accounting and by all evidence was doing a great job. Too bad his wife had chosen here uniform… plain black work pants, white blouse and black vest and flats… hair back in a bun and here ‘librarian’ glasses although it seemed to him that the pants were a little tighter than they needed to be and she always seemed to find an excuse to bend over something in front of him when the wife was not around.

He had checked out her ass several times and thought maybe she had noticed him a few times… probably not… he was sure that just yesterday the plain white blouse had one button more than usual open and, as she brought him his triple scotch she leaned over just enough to show an incredible set of breasts almost, but not quite hidden from sight… mmmmm he found himself thinking and laughed at his innocent fantasy…..He entered the suite and breathed a sigh of relaxation …’honey I’m home’ he called jokingly… to his surprise he heard a quick answer from the kitchen… ‘welcome home Mr. F..’ I will bring your scotch right into the study, make yourself comfortable’… well, so much for privacy he thought.

He sat in his favorite chair and kicked off his shoes heard a ‘clip clop’ sound from the kitchen and bar area…. unsure of what it was he closed his eyes for a second and the sound approach the study…. ‘here you go sir’ said a voice like Dee’s but an octave lower than usual… he opened his eyes and she was standing in front of him… the severe daily outfit was gone instead she wore the classic French maids outfit… heels up to the sky… silk fashion hose with billowing impossibly short skirt and a top cut down to her waist.

The glasses were gone, the hair was fucking big, lips makeup and nails all done to perfection and a large pair of triple scotches on a silver tray… ‘Holy shit!’… he muttered before he could stop himself… she laughed a confident laugh and clip clopped across the hardwood with the drinks. ….’cheers…. boss… she said handing him the scotch… as she leaned over this time there was nothing left to the imagination… her breasts were extraordinary, swayed forward unhindered behind the flimsy black thin top and his eyes bored into them… without though he took the drink and downed it…only barely noticing the slightly acidic bite to it.

She smiled again, a bit predatory now he thought and handed him the second one. ‘Drink this’ she said forcefully.. he looked at her for a second and did what he was told not realizing that at that second the roles were reversed and Dee was now in charge…. he drained it in one draught and felt the warmth down to his toes… she took the glass from him and said ‘time for a refill, boss’ she turned to walk out and her skirt only half covered the most perfect ass he had ever seen… wickedly, she dropped a napkin and slowly bent over to pick it up…. his dick jumped in his pants at the perfection of the ass with silk covering only the legs… he began to feel dizzy with her sexual appeal, the booze and something else that had the room spinning and his dick hard as a rock… she strutted out on the stilettos with a confident smirk at him over her shoulder.

He stood and tried to clear his mind but could not get the image of her breasts, ass, legs, lips, hair, feet, scent and body out of his mind…. she walked back in with two more triples… the blouse was now unbuttoned and only a halter bra holding them up pertly was visible… she stalked him like a panther, climbing onto his lap and said ‘open your mouth john, I will feed you the scotch now’ he tried to argue but she grinded her ass into his rock hard dick and pushed her breasts into his face…. ‘take your medicine she said and laughed as she told him the drinks were laced with Viagra… he felt it coursing through him and her breast and ass overwhelmed him he opened wide and she poured both down his throat then kissed him deeply slowly wetly he was beaten and he knew it … his hands went to her ass and grabbed it… then he licked and sucked on her breasts deeply as she crooned ‘yes baby boy… let mommy take care of you’.no more worries for you this week’…. he melted and she pressed her breast into his face, cutting off his airflow, her hands behind his head pulling him in tighter… gaining more and more control.

‘Now she said, get naked for me little boy’ and get on your knees in front of mommy’…. he did, staggering with the booze and pills, hornier than he had ever been. he kneeled before her and she turned an lifted the skirt exposing the perfect ass ‘now serve mommy’ she said… he pressed his face into her ass… licking and sucking as she spread her cheeks wide. Pushing him back till his head leaned on the chair she sat on his face ass cutting off all air and she held his hands helpless as his tongue probed deeper and deeper the taste and sexuality of it almost overwhelming him she moaned and groaned and suffocated him for two minutes before allowing him to breath. he gasped almost passed out and asked for more… ‘more? she said… I have one more thing to show you Johnny, mommy has a surprise for her little boy’ she turned and lifted the front of her skirt, exposing a perfect, long and erect cock.

He nodded in complete satisfaction as he had surrendered to her. …. she was in charge and he knew it he would give her everything… cards, pins, insurance and cash… just to let him serve his mommy…. as he neared passing out she eased up on face fucking long enough to let him release… the biggest and most satisfying climax he ever experienced… he relaxed and did not notice her not releasing the belt, it grew tighter….’shh little boy…mommy wants you to sleep… just for a minute….shhhh close your eyes…don’t resist..’ he started to slip away and didn’t see the cruel smile on her face… shhhh baby boy sleep for mommy… sleep forever Johnny…. shhhhh’ the world centered into a dot of light with only her face and voice holding him to it….’sleep forever now’ she said and he did.